What Is Cognitive Behavioural Therapy?
How CBT Helps with Depression, Anxiety, and Other Challenges 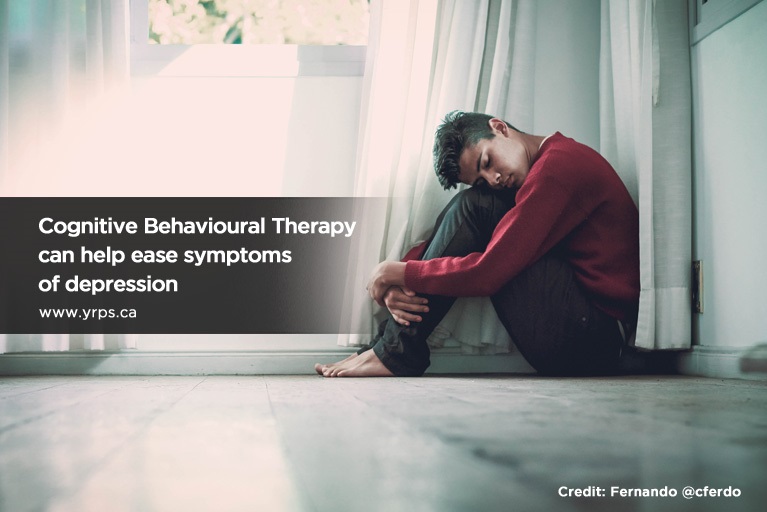 To fully understand Cognitive Behavioural Therapy and how it helps with depression, anxiety, and other mental health challenges, it’s helpful to look at how it originated. In the 1960s, psychologist Dr. Aaron T. Beck was working at the University of Pennsylvania where he designed and carried out several experiments testing established psychoanalytic concepts of depression.

What he found, however, was that his research did not validate these concepts at all, and so he looked for other ways to understand depression. Instead he discovered was that his depressed patients also experienced spontaneous streams of negative thoughts, which he called “automatic thoughts,” and which fell into three categories:

By asking his patients to identify and assess these thoughts, Dr. Beck found that they were able to think more realistically, which made them feel better. Essentially, when people changed their underlying or core beliefs about themselves, the world, and others, their therapy was more effective and long-lasting. This is what we today call cognitive behavioural therapy.

Since the 1960s, CBT has been proven time and again to be effective in treating a wide variety of disorders with more than 1,000 studies demonstrating its effectiveness. 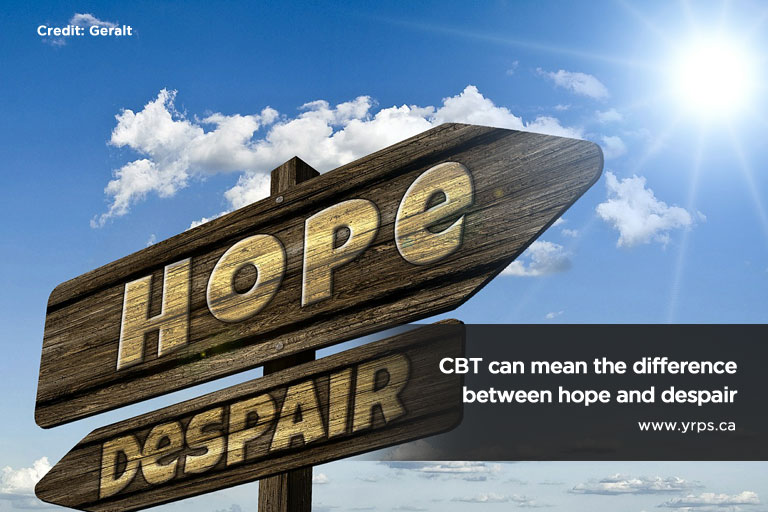 According to the Beck Institute, CBT is “a time-sensitive, structured, present-oriented psychotherapy directed toward solving current problems and teaching clients skills to modify dysfunctional thinking and behaviour.” Simply put, CBT is based on the notion that our cognition (how we think), our emotions (how we feel), and our behaviour (how we act) are all interrelated and that it’s our thoughts, mainly, that determine feelings and behaviour.

Negative thoughts, for instance, can cause a feedback loop through feelings, behaviours, and back to thoughts again. When people suffer from psychological distress, they can often interpret situations in a way that affects how they behave. This behaviour, then, can lead to feelings and thoughts that in turn continue to affect behaviour and so on and so on. Stopping or modifying these thoughts before they can have a negative impact on our feelings or behaviour is the cornerstone of CBT. 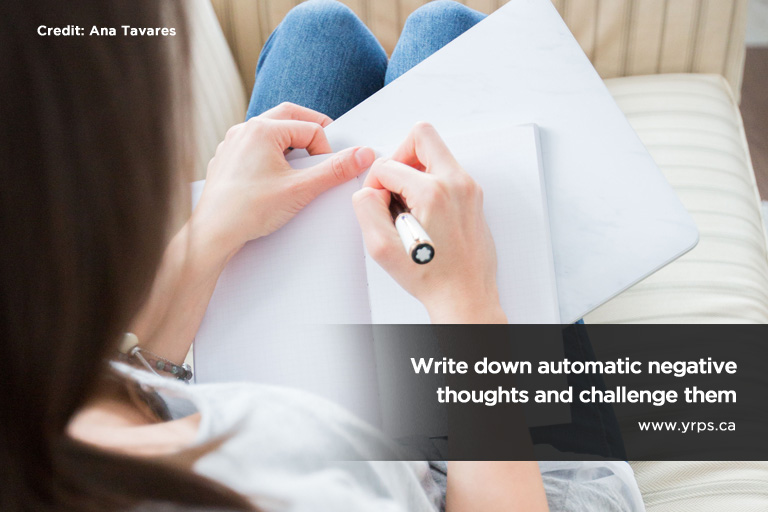 What is the Treatment Process?

There are many other therapies that are integrated into CBT and that can all help people find relief from depression, anxiety, PTSD, and other mental health challenges. CBT alone, however, can be quite effective. Even still, different mental health challenges require slightly different approaches, with issues like anorexia nervosa requiring behavioural modification first and foremost, while depression and anxiety would focus on thought patterns.

A typical CBT approach would be for the therapist to teach clients how to identify their distorted thoughts by evaluating them as they come up. Using tools such as thought records (diaries of thoughts), the client learns to recognize unrealistic thoughts and separate them from reality. Through this process, they can learn how cognition (thoughts) can influence their feelings and behaviours. With practice, they’ll eventually be able to do this on their own. 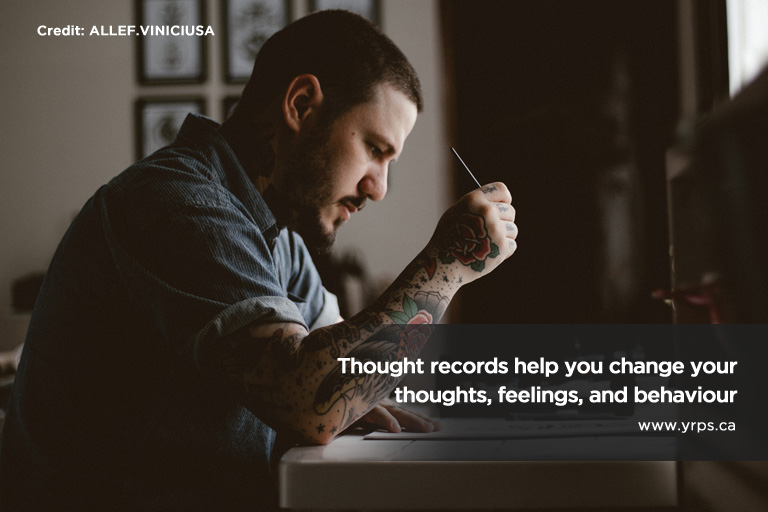 The best way to understand a CBT thought record is to go through one. Here’s an example of how a patient would fill out a thought record for the following scenario.

Situation: A friend walks by you in the hallway at work/school or on the street. You say hi, but he or she doesn’t say hello. They also look really angry.

Emotion or Physical Sensation: A CBT client might write down that they felt hurt, upset, angry, sad, or confused. They might rate each of these at a 90 intensity on a scale of 1-100.

Negative Self-talk/Automatic Thought: The automatic thought might be, “they’re mad at me. They hate me. I must have done something to make them not want to say hi to me. It’s my fault they’re angry.”

Evidence to Support the Thought: The evidence would be, “they didn’t say hi back to me and they looked angry and upset.”

Evidence That Does Not Support the Thought: The evidence could be something like, “I saw them just yesterday and everything was fine. They weren’t actually looking at me. They looked deep in thought and distracted. I remember her/him telling me that they had some financial worries on their mind.”

Alternate Thought: This is where a client would come up with a new way to look at the situation. Something like, “It’s likely that they didn’t see me and also there’s no reason for them to be angry with me. I’m sure it’s just that they’re preoccupied with some other things.”

Emotion or Feeling: At the end of this, a client would record their feelings or emotions, such as concern for their friend (70), hurt still (20), calmness (80).

Filling out thought records can be challenging in an emotional moment, but the sooner a client can get to them, the more this process becomes an automatic way of thinking. This is where the immediacy of CBT is useful for changing behaviours, thoughts, and feelings. 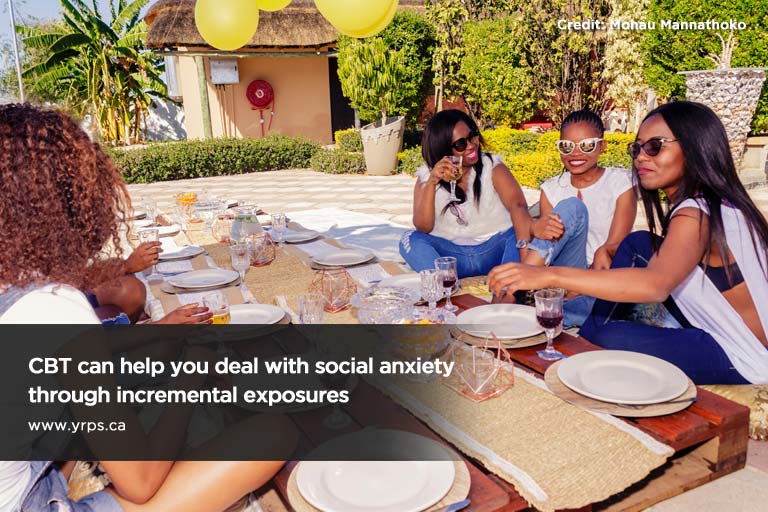 Helping clients identify unhelpful beliefs and prove them wrong is a powerful tool in the battle against issues like depression and anxiety, as well as other mental health challenges.

On top of using thought records, a therapist might help by recommending exposure therapy, where their clients put themselves in situations that are uncomfortable (but not dangerous), and then working through a “distress hierarchy.”

For example, a client with social anxiety might start by meeting a friend at a bar, or going to a small gathering at a friend’s house, and work through a progressively more challenging hierarchy of exposures until they are able to go to dinner by themselves or whatever is at the top of that hierarchy. 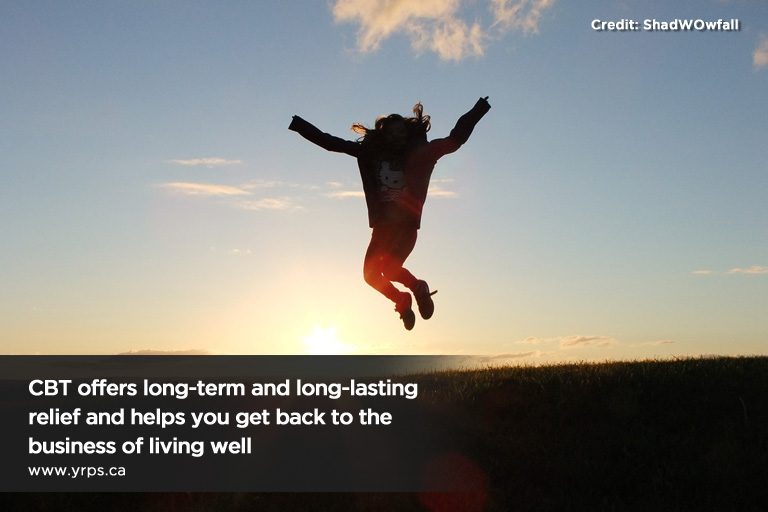 CBT is a proven therapy that addresses a wide range of complex mental health issues. It’s been used in practices around the world for over 50 years, and continues to be the go to modality for a majority of practitioners. Its effectiveness stems from the immediacy of the therapy and the involvement of the client in their own treatment.

The understanding that changing core beliefs leads to long-term and long-lasting change in a person’s mental health is why CBT is the therapy of choice for many and has given relief and hope to millions of people.

At York Region Psychological Services, we offer assessment and treatment options such as Cognitive Behavioural Therapy for psychological disorders that affect patients’ quality of life. Qualified counsellors can help you develop strategies to handle problems and regain control over your life. Contact us (416) 602-3230 to make an appointment; we want to help you get back on track.